Written by Richard Murray and from Overblog

Martin Luther King junior <M.L.K. jr.> is a mythologized man in modernity, one day he may become legend like Horus or Gilgamesh or Sun WuKong or Toussaint Louverture or Quetzalcoatl or Abraham Lincoln; in the United States of America his life is celebrated on the eighteenth of January in the Roman Catholic calendar, Gregorian is the common name. I wrote this prose having one question in my mind, it has some part.

What display the philosophy from M.L.K. jr. In modern humanity?

First part, what is the philosophy from M.L.K. jr.? Many in modernity will suggest: non-violent action, rule of the people or democracy, interracial friendship. But I oppose said assertions.

M.L.K. jr. once asked, I paraphrase, if the Federal Bureau of Investigation from the United States of America <F.B.I. of the U.S.A. > will answer why the Black community, phenotypical range race, in the U.S.A. was nonviolent in majority since the war between the states, commonly called the Civil War in the U.S.A., ended; that prove to me M.L.K. jr. was not fully convinced that the non-violent heritage in the Black community of the U.S.A. was not manufactured or from a manipulation outside of said Black community. M.L.K. jr. chose the non-violent path for himself, but never told anyone else they had to be non-violent; he only informed them of a simple truth: every action has an equal or opposite reaction. Non-violence return non-violence or violence return violence but if you fail to reach a goal or get results the odds of being alive to try again or to simply smile at the sky tomorrow are higher with non-violence than violence.

The rule of the people is eternal. I restate, the people always rule. The word tyrant come from the name of a Hellenistic, commonly called Greek, leader who, in legend for we can prove nothing today, abused those he led. One problem is made in suggesting said tyrant ruled the people. Said tyrant didn’t protect the boundary of the state, other people did, or grow the food he ate, other people did, or maintain the infrastructure he used, other people did. The tyrant never does anything alone. The tyrant in human history is not a superman. The tyrant is being empowered by... the people. The people are always the rulers. Sometimes the people want benevolence or unity, sometimes the people want hate or chaos. When the people place a leader when they want benevolence, they call that leader a saint. When the people place a leader when they want chaos, they call that leader a tyrant. M.L.K. jr. was an advocate for the betterment of Black people, someone who works for the betterment of Black people. He comprehended that the rage or hate in the Black community in the U.S.A., clearly, was not ruling; if it was, the world he was born in would had been other.  The key is not getting the people to rule, the key is accepting how the people rule.

M.L.K. jr. chose a non-violent path plus acted as a guide to the rule of the people; he wanted people to rule non-violently while positive. Never forget non-violence can still be negative. Said desires were the basis to the idea that M.L.K. jr. was a supporter of complete miscegenation. Miscegenation I use in an antiquated sense, of a thing that mixes races or is born from mixed race. All life on earth, all things not living on earth, are children of earth. It is true all on earth is one race. It is also true that in any race multivides can be, that are not unnatural or pleasant. The lion is not the mouse, but can the lion plus the mouse live their lives their own way in one space? M.L.K. jr. Supported miscegenations to improve quality of life, but not to undermine cultures or suggest a mixed culture is better than a monolithic one.

Second is to define the modern environment. When I look at governments throughout humanity over a certain quantity of people, no city states, or various multi-flag organizations, like the United Nations, or globally reaching private enterprises, like the National Football League<N.F.L.> only F.I.F.A. display all the aspects M.L.K. jr. preached.

Each government in current humanity, over at least a million people or not a city state, is not an example of reaching a goal nonviolently. Every said government uses violence every day to maintain control or emit power or manipulate scenarios. Most multi-flag organizations from the United Nations to the European Union to the African Union or all other similar are too inflexible in their democracy. Said organizations deny entry to merited members or kick out current members when their rules are challenged by the culture of potential or current members. Major League Baseball <M.L.B.> of the U.S.A. undermined the Negro Leagues in the U.S.A., the Mexican Baseball League or the Nippon <Japanese> Baseball leagues while championing itself a beacon of racial unity through Black baseball players being present in it.

This leaves F.I.F.A. standing alone. What is F.I.F.A.? It is a financially corrupt global organization that has grown nonviolently by sticking to the purpose of expanding the outreach of a sport having non-lethal intentions, you can die playing futebol. F.I.F.A. has more members than any other multi-flag organization? The why is simple, communist/religious zealots/blacks/whites/asians/south americans are not told what to do in their countries by white european christians who use fiscal capitalism. F.I.F.A. system allows for its members to: relate to each other, bargain, peddle, trade, deal, scheme with each other. Do some people financially cheat? Yes. But that is what M.L.K. jr. was proposing. No one is forcing anyone to cheat in F.I.F.A. You are free to play by the rules, or by your own rules whether or not they are more or less stringent. In the U.S.A. a common theme recently is for people to suggest that everyone had to be on the same page. That is not how F.I.F.A. grew. The Soviet Union was a member of F.I.F.A. Russia is a member now. F.I.F.A. had no hand in the Soviet Union becoming Russia, but accepted either or, absent any financial/cultural/governmental reviews. Taiwan or China are members of F.I.F.A. absent any large denouncement from China. Why? Whatever happens between China or Taiwan in the future, F.I.F.A. is ready to welcome their membership. Drug dealers in Colombia financed their league and F.I.F.A. had no public issue with it. F.I.F.A. grew global by letting countries be themselves, something many are trying to delete in the organization.

M.L.K. jr. wanted content of character not color of skin to be the critical base of the future. M.L.K. jr. never suggested that everyone in humanity had to be friend or family to have said critique as the norm; he knew the single mindedness some think is warranted is merely another form of slavery. The parts of former Yugoslavia do not see eye to eye on many things. Each part has a football association.

Whenever a Black person, woman, asian, latino, or anyone not white or male or christian or anglo<linguistical race> speak about members of their race being unable to own in or be a member of an organization they are lying if they say said organization is the soccer world governed by the financially corrupt F.I.F.A. Black people have nothing to argue about. How many Black people own soccer clubs/are paid coaches/are paid trainers/are ball boys/are paid athletes in the Confederation of African Football or the Caribbean Football Union? How many women own soccer clubs in Union of European Football Associations? How many women are blockaded from spending money to start a female, girls or women, soccer team or league in any member of any confederation in F.I.F.A.? Like the Blacks mentioned before, how many Asians are owners/paid coaches/paid owners in the Asian Football Confederation? Like the Blacks or Asians mentioned before, how many Latinos are owners/paid coaches/paid owners/paid trainers in the Confederation of South American Football?

Each racial community in humanity can say thousands to millions of their members act as every possible role that can exists in the soccer world that F.I.F.A. governs.  And, this community grew to have more flags represented than any other while financially corrupt through all the various violent, mostly deadly, conflicts in the last century and the ones after. M.L.K. jr. in the soccer world F.I.F.A. governs, alone, has a display of what he wanted; he never wanted a fantasy or a humanity absent pain or dislike or hate or sin. He chose not to be hateful. He wanted to help those who were likewise. But he never wanted a courtroom of the righteous. He never wanted humanity to be a philosophical prison.

M.L.K. jr. wanted a humanity where all are represented, all participate, all can grow or thrive, all can shrivel or stumble, while none have to pick up arms or throw a punch to succeed or fail, where none have to be afraid to be themselves or fear their way of life has to be destroyed for another. Only one part of humanity displays the dream M.L.K. jr. Had; that part is the soccer world governed by F.I.F.A. 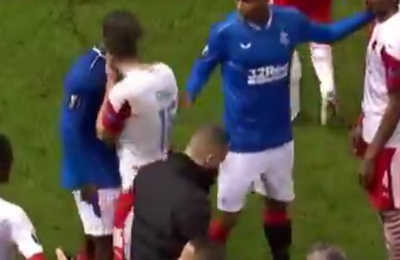 The team that turns over the apple cart The Modern Game
Atletico Madrid defeat Barcelona 11/21/2020
OpenPulpit : Pulisic and the problem of finding the right club
Comment on this post
Newsletter
Follow me
Search
In the beginning I had a setpece Fiction concerning the beautiful game, and some news every now and then